Purchase links:
奇幻蛇郎與紅花 – Snake Lord and the Red Flower
一個傻蛋賣香屁  – The Dummy Who Sold Farts
機智白賊闖通關 – The Smart Liar
黑洞裡的神祕烏金 – The Treasure in the Dark Hole

These are Chinese folk tales and they are “super” weird but “super” interesting. I’ll give you an example below and I’ll explain it in the video as well.

This book was recommended by my friend Ruby who said her daughter’s eyes were “glued” to the book. Whenever I hear that I immediately would pull out the book for my kids to read right away because the best thing to keep them interested in reading is well, reading interesting books! The story goes like this:  a baby is born (coupled with eerie illustration but nicely done) with a birthmark on his leg that reminds people of a snake. Due to this, he grew up receiving cruelty from the people in the village. People ask their kids not to play with him and people who have accidentally touched him would wash themselves to cleanse themselves of his bad luck and fortune. His dad chops timber to sell for a living and one day when they’re up the mountains, his dad slips and falls off a cliff and all the boy’s cries were not received with an answer from his father (yes, very tragic and they even have an illustration of the cliff where the boy is on top of the cliff bowing down and the father is down below… with some blood). From this point, my kid was hooked.

Little boy roamed the streets receiving more cruelty and ate scraps from the grounds and plants where he could find. Finally, he decided to leave the town. As he left town and went into the dark mountains, a large mysterious magical snake followed him (implying he’s going to transfer his magical powers to the boy).

Years passed, on the other side of the mountain in another town, there’s an old woodcutter who has two beautiful daughters. Both beautiful but the older one has spots on her face due to an illness when she was young. Younger one is pretty outside as well as inside. She’s very thoughtful and kind and caring.

Old man goes out looking for wood only to be lost in the mountains due to fog. When the fog dissipated, he saw the most beautiful flowers shining so bright in red in the dark mountains. He went and picked two for his two daughters. However, the instant he picked them… the bushes rustled and snake forms appeared and disappeared in the bushes. Then a dark hole emerged and out came Snake Lord (or something like that he called himself). This of course, was the little boy who had the birthmark who went into the mountains.

Snake Lord is mad and demands the old man to return his flowers and the old man cannot because they’re already cut from the stem. Snake Lord demands old man to give up one of his daughters to marry him. Old man was forced to agree. 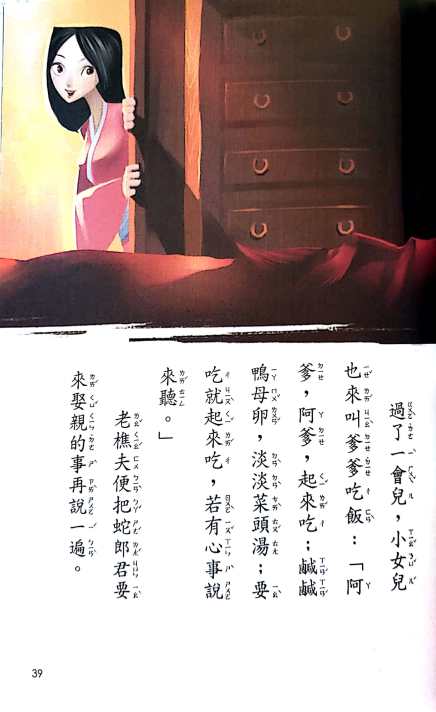 Night of the wedding the old man saw the Snake Lord actually turn into a snake at night and shuttered at the scene but was too afraid to tell his daughter. I’m going to skip some details because then I’d be writing a book here…

So anyway, she married RICH. Her sister found out that she married rich and her sister (evil) went to visit her. Her sister manages to push her little sister into a well and kill her. Then she tells the Snake Lord she’s his wife it’s just that her face has spots due to a cooking accident. Then a bird came out from the well where the little sister died, that sang so beautifully but with words that say “my sister is wearing my dress, shame on her… my sister is wearing my hair clip, shame on her… ” 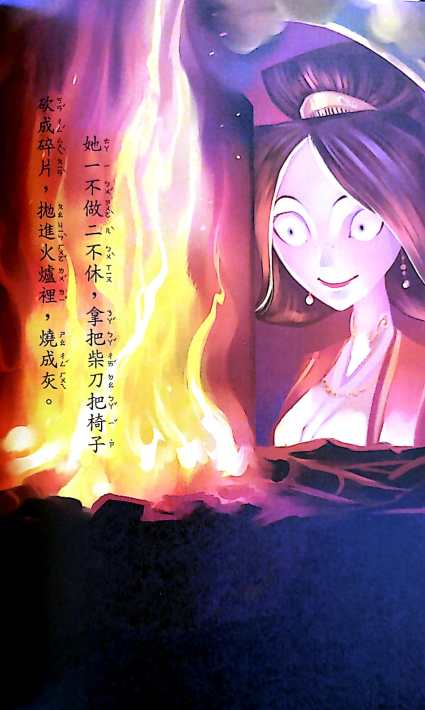 Some old woman comes and takes her ashes away only to find a piece of rice cake which she wanted to feed her grandchild but as she got home, she found out the rice cake becomes a little baby girl. She decides to raise the baby girl but the baby girl grew in record speed and became a beautiful woman.

One day the Snake Lord walked by and heard a beautiful singing voice singing the same song, “my sister is wearing my dress, shame on her… my sister is wearing my hair clip, shame on her… ” and he immediately woke up from what seemed like a deep spell. He recognizes that this is his true wife. They both went home and the older sister was so ashamed of herself, she dug a hole in the ground and became a mole and lived underground forever.

This story is weird but fun and interesting at the same time. It’s great for boys and girls. I told my husband half the story and even he wanted to know what happened. The other books in the series is just as interesting. Highly recommend!!!

Here are some other inside pages from the series: